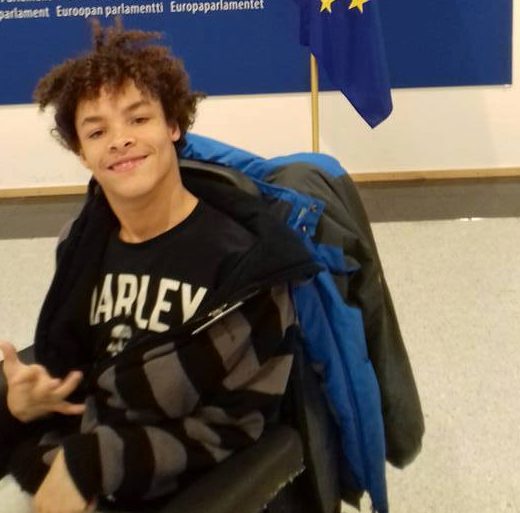 Brandon went to the EU to attend a meeting about how we can make voting more accessible to disabled people, especially people who have learning disabilities. This is what he had to say about the trip…

Trip to Brussels – by Brandon Aughton

On the 6th of December I travelled to Brussels, Belgium. I was invited by an ex work colleague of mine who used to work at ALLFIE . Because of how long it takes to get there by train, me and my P.A travelled the day before.

For anybody planning to go to Brussels who is a wheelchair user, I would strongly suggest booking the taxi well in advance of your trip to avoid a last minute booked taxi not turning up on time or not at all! You won’t be able to catch a taxi outside the train station, as they are not accessible.

After travelling all day on the 5th and having a well needed sleep in a very good hotel.

The following day, attended a meeting at Brussels Parliament. The meeting took place in the Atrium building and was divided into a morning meeting and an afternoon meeting. The meeting in the morning was an introduction to the European Parliament which consisted of a presentation on what the European Parliament do in Brussels. The afternoon meeting consisted of a congregation of MP`s and European Leaders. The meeting was about how we can make voting more accessible to disabled people, especially people who have learning disabilities. Someone from every member state of the European Union attended this meeting to share what it’s like to vote as a disabled person in General Elections. It was a real eye opener to hear that some people weren’t able to vote as they found it too complicated to understand. I found it a true honour to go and I have now been to two of the European Parliaments.