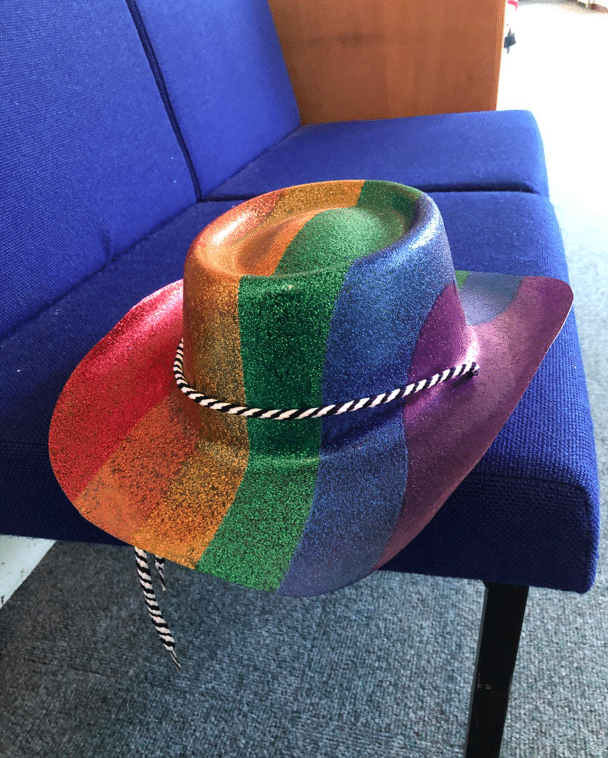 These are the notes from which a Nottingham Deputy Head Helen shared her personal story in a Year 5 and 6 assembly last week. Response from parents and children has been totally positive. We think this must be one of the best coming out speeches for pupils and adults that we have seen so far…
I wanted to get us all together this morning because I’ve got something important to say.
I’ve worked at Seely for 16 years and I’ve never told any children this before.
*Show the photo of my family* This is my family photo that is stuck on my office wall. These are my dogs, the well behaved one and the one that runs away from me and tries to pull me in the canal; this is me and this is my wife, Sal. I’m a lesbian (that’s a word for a woman who loves another woman or a girl who loves another girl) or gay (that can be a man who loves another man or a woman who loves another woman) or homosexual (homo means the same and sexual just refers to who you love)
I knew I was gay when I was 10 but kept it a secret until I was an adult.
When I was your age it was illegal for teachers to talk to children about being gay. They could get into big trouble or even arrested. That’s not the case anymore I wanted to tell you all for two reasons:
1. We don’t use racist language anymore. We have very few incidents of people saying racist things, in fact the only things we have now are occasionally one of the younger children might say something without thinking about their words, but they haven’t meant to upset anyone.  But we say homophobic things (where people are unkind based on someone’s sexuality – who they love) all the time. I’ve spoken to people who have been saying, “you’ve got the gay virus” or making fun of someone for being lesbian. It makes me upset because you’re using my family as an insult and making it seem like a bad thing or that it’s wrong.
2. I was 10 when I knew I was gay. The same age many of you are now.
I know there are at least a couple of children who are listening to me now who have told people in school that they think they might be gay and I wanted to be a good role model to them. If I hide who I am, it suggests that I’m ashamed or I think it’s wrong and I don’t.
I have many jobs in school that you probably have no idea that I do, one of them is writing the assembly rota and another is planning staff meetings. I’ve been making sure that everyone learns about equality so people can be treated with respect. I asked Ms ______ to do her Eid assembly so everyone knew all about Eid. I made sure we were learning about the Olympics and how they used to be so unfair for girls and women. I’m making sure we teach lots of black history and about positive black role models so we all see ourselves reflected in the lessons and assemblies we do. I’m standing up for everyone as much as I can so I’m hoping you feel you can do the same for me and if you hear anyone making fun of someone because they’re gay or using the words gay or lesbian as an insult that you remember me and call them out on it and you tell them it’s wrong.
All the teachers and teaching assistants in school know I’m gay and they’ve known for as long as they’ve known me. They all still care about me and treat me with respect. So if you ever had anything you were worried about, I promise you you can talk to any staff member and they’d be happy to help you or just listen if that’s what you need.
I really hope after listening to this that your feelings about me haven’t changed. I’m still me. I also hope this makes you think about the language you use and how you treat each other because kindness to each other is everything.
This isn’t a big secret so talk to each other if you want to. Talk to your parents and carers at home. Talk to your teachers and teaching assistants. And talk to me about it if you want to. I’d be happy to.
The rainbow is often used as a symbol of pride in the gay and lesbian community and it’s often used by people who support that community so today’s glittery cowboy hat seems like a very appropriate choice. *Put on rainbow cowboy hat*
Thanks for listening to me this morning everyone.
Trustpilot
Trustpilot