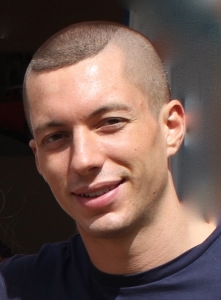 Firstly Colin and I went to Arun’s house to carry out some person centred planning creating a PATH for him. Arun is 19 years old and has a brain injury. The process went very well and Arun was very positive about the PATH process and in a way I feel this kick-started Arun into following his dreams. During the PATH process Arun highlighted his main interests and also what he would like to be in the future. Part of Arun’s dreams at that time was to have his own Business and also be a professional singer. The main aims for Inclusive Solutions was to work with Arun and his family to give him a better life, as when we initially met Arun he was in quite a bad place.

So I took the role of being an Inclusion Facilitator for Arun this involved me going to Wolverhampton to meet up with Arun. We decided I would visit Arun every Saturday for 4 weeks then once a month for a following 5 months.

The First visit was very positive. I went to Arun’s home and spent 1 hour with him and his family to have a quick catch up, then Arun and I caught a bus to Mander shopping centre this was a good way for Arun and I to get to know each other and also a good chance for Arun to show me around his local town. We got some food and during this time Arun really opened up to me and told me all about his life and how he really wants things to get better in his life. After getting some food we went into Wolverhampton to speak to some local shop owners about starting up a business. We received some different responses some positive and some negative. We did receive some good advice about taking out a lease for a business. After doing this research Arun and I caught a bus back to his house then I left for the train station via taxi.

The second visit was also very positive. Arun and I went to a Punjabi music concert called “A Night With Stars”. This was good for Arun to be around people with similar interests to him and turned out to be a good bit of market research for Arun as he was able to see different performance styles. He then explained to me how he wants to preform when he gets to that level.

The next visit was very interesting and positive. Arun and I went to a local gym. We trained for over an hour and Arun was really enjoying himself. After our workout we bumped into a personal trainer called Jacob. Jacob and Arun really clicked and were standing having a conversation for over 20 mins. Jacob seemed like a positive person that Arun could talk to so Arun and I got Jacob’s contact details and told him we would contact him if we every needed any personal training. Arun had openly told me that he wishes to get his confidence back and that he has low confidence ever since he was punched in the jaw a few years ago by someone that Arun thought he was friends with.

During this visit Arun explained to me how he does not feel safe travelling on his own and he will only leave the house if myself or one of his family members is with him. He told me how he has been chased before by some local youths and has also been called names by the same group several times. I wasn’t sure if Arun was exaggerating the problem or not, until after the gym Arun and I were waiting at a bus stop and the group of youths that had been troubling Arun walked past. Their body language and the way they were looking at Arun made me think that Arun had been experiencing problems.

As a risk Assessment I would say if I had not been there it would be an 8/10 chance of emotional abuse and a 7/10 chance of physical abuse. Arun and I had a very long discussion about techniques that he could use to prevent and defuse these situations. Arun took the advice really well and came to the conclusion that he has a habit of staring at people and this is something we worked on since. All in all the 3rd visit went exceptionally well and Arun said “I am really happy, I never thought I could go to the gym like this and I’ve just done it!”

The 4th visit was quite difficult. I thought that Arun and I was forming a really positive relationship however the previous week Arun had been having some money troubles and this was all very stressful for him so when I met Arun his whole demeanour was very negative and he didn’t seem as motivated as on the previous visits.

On this particular visit Arun and I had decided to visit a music studio for Arun to record a song. It was good for Arun to get a feel for what its like to be in the studio environment as one of his dreams is to become a singer. Arun was not happy with the song that he had made. I told Arun how great he had done, especially for his first time but this did not help his confidence. After this we went for some food and we had a conversation about ‘disabilities’. I told Arun how ‘I don’t see him as disabled I just see him as a normal person’ hoping this would make Arun feel better about himself. A few days after this visit Arun messaged me saying “Louis I don’t want to see you anymore, you’re saying I’m not disabled you don’t know me!” I texted Arun back and explained to him that all I meant was I see him as a normal person and I apologised if I had offended him. After a few days Arun rang me and we had a long discussion and sorted things out.

The next 4 visits were all very positive. Arun and I covered a lot of ground in terms of moving towards Arun’s dream lifestyle. We worked on social skills, being comfortable in social environments, conversational skills, having a positive mindset, staying physically active, building relationships, creating business links, positive body language and not staring at people. Arun and I visited the gym several times where we worked with the personal trainer Jacob who is a really positive person, lives near Arun and always offers Arun great advice. We also went to Wolverhampton College twice. The first visit to Wolverhampton College was for a needs assessment. This meeting went well and Arun seemed really excited to join college. He explained to me how he was scared and excited at the same time. I reassured Arun that everyone experiences these feelings when starting/trying new things in life, and explained to Arun examples from my own experience about how leaving my comfort zone benefited me. This seemed to really click with Arun and he began using these positive thinking techniques in other areas of his life.

Arun and I managed to locate a new Music studio, which we went to 3 times. Arun made 2 new friends Rob and Phil. As Arun’s main passion is for music he had a lot to talk about with Rob and Phil as they too where really into music. Rob was the manager of the Music studio and Phil was a music technician.

During the work with Arun we always had our eyes on the future as Arun had a difficult past this really opened Arun’s eyes to a new world and a new way of living. Arun explained to me his business plans and how he wanted to improve his Maths and English skills before he opened his business. We also made a music video for Arun, which turned out great. Arun also purchased 10 personal training sessions from local personal trainer and newly found friend Jacob.

The next phase of my work was a transitional period, as I was soon to step away from working with Arun we had decided it would be great for Arun to have a Personal assistant to assist Arun with attending college, going to the gym and visiting the music studio. We just needed some help with funding so we contacted the local Brain Injury service they visited Arun and I several times and did various assessments. It was a long process but eventually they managed to get Arun social funding so he could employ a Personal Assistant. I was able to work with the new PA to ensure the work I had begun could continue successfully. This was a great result as Arun now has a whole team of people that all want to see him do well and are also a great support system for Arun.

All the Names/Locations have been changed in this document to protect identities.