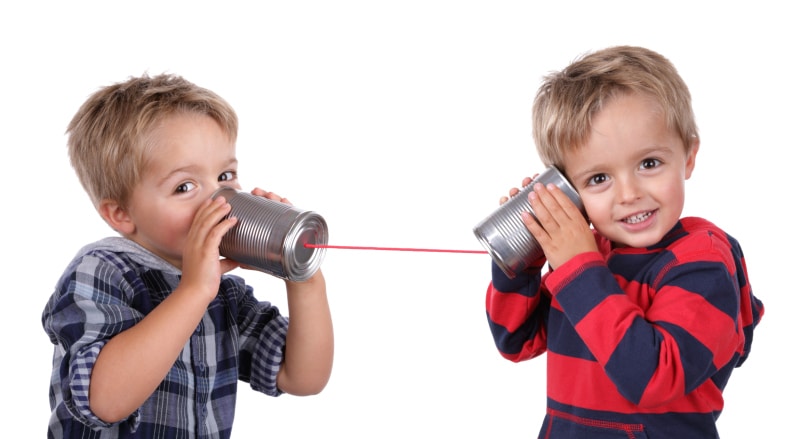 “We are all much more simply human than otherwise, be we happy and successful, contented and detached, miserable and mentally disordered, or whatever.” – Harry Stack Sullivan

Not many people have ever heard of it but the Diagnostic and Statistical Manual (DSM) 5, (American Psychiatric Association 2013) is used by paediatricians and psychiatrists world wide as an aid to diagnosis. In the DSM, ‘echolalia’ (immediate or delayed) is listed as a significant symptom leading to a diagnosis of autistic syndrome disorder (ASD). The DSM describes echolalia as an example of a repetitive pattern of behaviour that may include verbatim repetition of words, phrases or more extensive parts of dialogue or songs. The DSM says that these utterances do not appear to be relevant to the current situation. Echoing (echolalia) is seen as a symptom of an underlying condition, a sign that something is wrong.

Before we go any further, we need to be clear that the symptom descriptions and the diagnosis of an ‘autistic spectrum disorder’ (ASD) given in DSM5 do not explain anything – we are none the wiser why ASD individuals echo speech. Maybe we shouldn’t expect a label to deepen our understanding – the trouble is we act as if it does.

In this context ‘echolalia’ is simply a label for a verbal behaviour and this way of using speech, by professional agreement, is seen as a defining ‘symptom’ of ASD. It isn’t an attempt to explain why someone should echo speech in these distinctive ways. But sooner or later we’ll want to ask ‘Why?’ – Why do people repeat things they’ve heard? And I mean any of us, not just individuals with an ASD label.

Again, we need to be clear that calling this kind of repetition ‘echolalia’ explains nothing. And this is true even though giving the behaviour an unusual Greek/Latin name might make it appear the professional understands it in a way you don’t. You don’t know what the word means when you first hear this label and you assume the professional does. However – and this is key – labeling someone does not tell you anything about that person’s experience and it does not explain why they do something you find unusual e.g. echoing another’s speech. Another way of putting this is: Simply saying someone ‘displays echolalia’ because they are ‘autistic’ explains nothing and tells us nothing about the reasons they might have for repeating what they have heard.  So we need to begin our thinking about echolalia with the maxim – “People do things for a reason”. And we need to remember that, however superficially compelling it might be as an answer – the reason isn’t autism.

When something another person does confuses us and is hard to understand one place we can search for reasons is within ourselves. If we can identify the times and contexts when we do something similar then we believe that will give us clues about why someone is doing something we find unusual – something like echoing.

So, my reframing of echolalia is about introspection; it’s about becoming more aware of how we all use echoing in our everyday communications.

When we think about those times we repeat something to others or ourselves, notice that we never call this ‘echolalia’ much less ‘delayed echolalia’. We call it ‘expressing ourselves’, ‘thinking aloud’, ‘voicing our thoughts’ – if we call it anything. Diagnostic labels are for other people and don’t get used too much in the first person voice – ‘I’.

So what are some of the reasons we might give when we echo in our everyday communications – with others and with ourselves?

What follows is a quick list from my own experience of my reasons for repetition (and their contexts). I shouldn’t have been surprised to discover that, in only 15 minutes, I’d thought up more than 11 separate reasons why I echo. I think they will all be recognisable even if I’m describing something you personally don’t ever remember doing.

SOME REASONS WHY WE ECHO

For some purposes we echo words to ourselves, sometimes we voice them, sometimes we don’t. These ‘private’ uses of echoing include:

All of this is ordinary, everyday even, but nothing is too ordinary to be discounted here. If we are going to deepen our understanding of echoing and why we think we do it, we’ll need as many examples as we can think of. I’m sure you can add to the ones I’ve listed above. I’m not saying the reasons listed above are a full account of the reasons behind an autistic person’s echoing, but some of them will be true some of the time. It’s also true that the more we understand echoing, the more nuanced we can be about it, then the more thoughtful our guesses will be when we try to understand autistic echoing.

But, as we do this, let’s not underestimate how difficult it is to go beyond medical model thinking. Because when we do try to go beyond it’s then we realise we are up against some very deep-seated beliefs. The medical model is like a black hole in our minds when we try to think differently about difference and disability. A black hole which swallows our attempts at person-centred or social model thinking and returns us, knee-jerk, to the questions: “But what’s wrong with this person and how can we fix it?’  These are the essential medical model questions and, whether we like it or not, they underpin all our special needs planning and paperwork.

So if you are asking yourself: “Why does he echo so much of what he hears?” – you need to remember this is one of the questions the label ASD can’t answer.

Maybe it’s time to consciously detach ourselves from medical model thinking, to steer a course away from that black hole, to stop using diagnostic labels like ASD in our educational planning, to think in terms of the ‘human spectrum’ which autistic people are a part of. As Harry Stack Sullivan said more than 50 years ago: ‘We are simply much more human than otherwise”. Remembering that seems a good place to start.

This is a very important recent academic paper on how autism is understood within medical/psychological circles. Specifically it challenges the (generally unquestioned) assumption underlying autism, which is that a deficit of social interest or motivation is the primary feature of the syndrome. It is well worth a close read particularly as it draws on autobiographical evidence from autistic individuals – still a rarely used evidence source in academic writing and research.