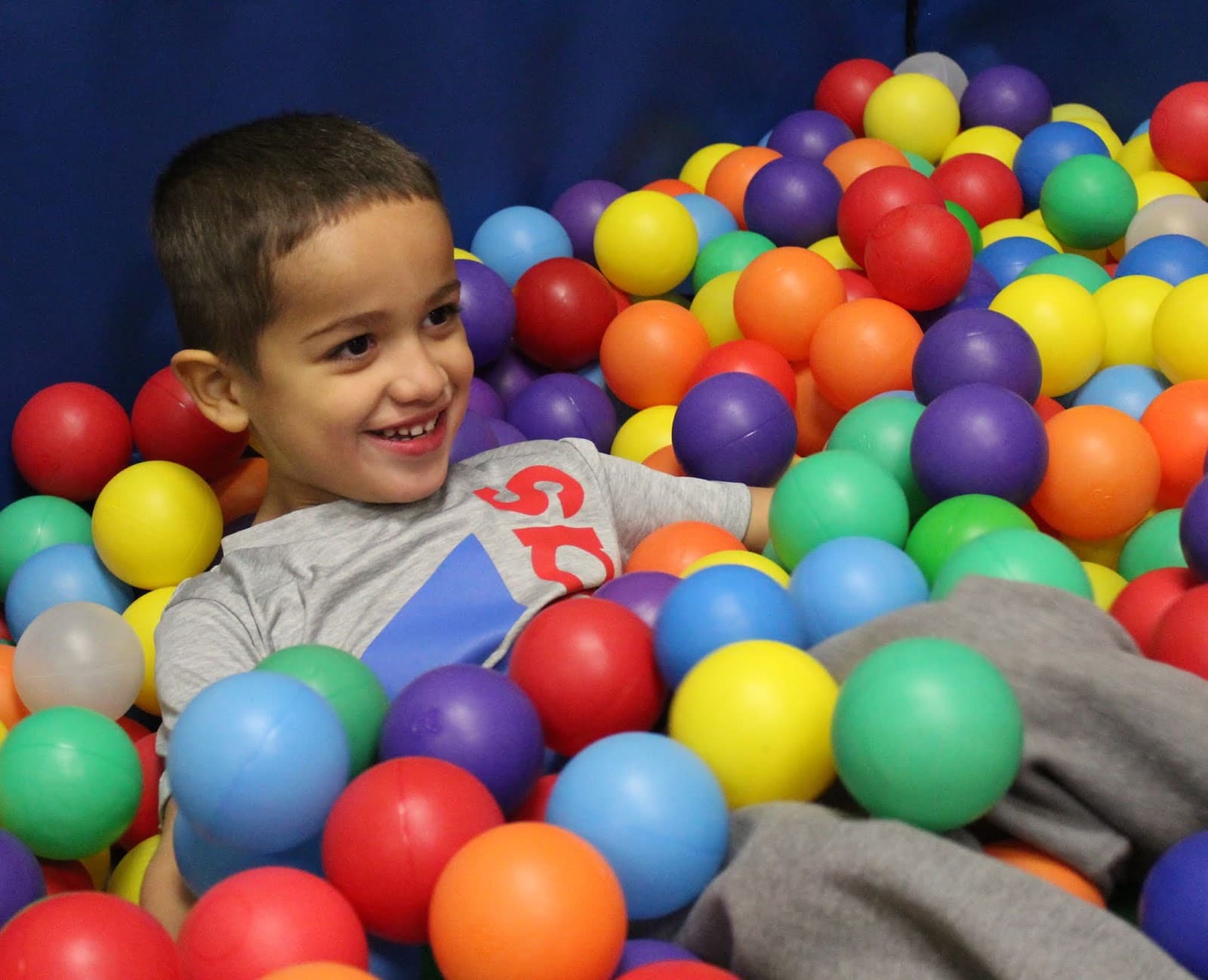 On a gray Sunday afternoon in December, families are flocking to a small, colorful gym housed in a school on a quiet block in Brooklyn. Inside, children are jumping into a ball pit, crashing into mountains of supersized pillows, rolling and bouncing on huge balls, and swinging and spinning wildly inside a cocoon-like sling.

This 877-foot-space would be nirvana to any child—and all are welcome—but in fact it’s a new parent-run, nonprofit sensory gym modeled on occupational therapy facilities. Space No. 1 is the brainchild of Extreme Kids and Crew founder Eliza Factor, a dynamic mother of three who created it as a place for special-needs families to de-stress and have fun in a warm, accepting environment.

In designing Space No. 1 Factor worked closely with Huck Ho, her son Felix’s occupational therapist and the program director at the SMILE Center in Manhattan. Felix, 8, has cerebral palsy and autism spectrum disorder.

While the bouncing, crashing and spinning are fun, these activities are key tools in sensory integration (SI) therapy, a treatment used by occupational therapists to help kids who have problems with what’s called sensory processing. These kids experience too much or too little stimulation through their senses and have trouble integrating the information they’re getting. As a result, it’s difficult, if not impossible, for them to feel comfortable and secure, function effectively, and be open to learning and socialization.

What is sensory integration therapy?

The idea behind SI therapy is that specific movement activities, resistive body work, and even brushing of the skin can help a child with sensory problems experience an optimal level of arousal and regulation. This, according to some OTs, can actually “rewire” the brain so that kids can appropriately integrate and respond to sensory input, allowing them to both make sense of and feel safer in the world. Such “rewiring,” writes OT and SMILE Center clinical director Markus Jarrow in Cutting Edge Therapies for Autism, can decrease anxiety, making them “more confident, successful and interactive explorers.”

This assertion is controversial, as is the term many OTs use to describe these issues: sensory processing disorder (SPD). SPD is not recognized by psychiatrists as a diagnosis, though they acknowledge that children do have problems based on over- or under-receptivity of their senses. Most, if not all, children and adults with ASD have significant sensory issues. But not all who do are on the spectrum; they may have ADHD, OCD or other developmental and learning delays, or no other diagnosis.

The seven (or eight) senses

Both the description and treatment of SPD are based on the work of Dr. A. Jean Ayres, an OT who added to the traditional five senses two “internal” senses: body awareness (proprioception) and movement (vestibular). Proprioceptive receptors, found in the joints and ligaments, facilitate motor control and posture; vestibular receptors, located in the inner ear, tell the brain the body’s position and where it is in space, key to balance and coordination, among other things.

Meanwhile, leading SPD researcher and advocate Lucy Jane Miller adds an eighth sense, interoception, to the mix. The founder of the SPD Foundation and author of Sensational Kids: Hope and Help for Children With Sensory Processing Disorder, who was trained by Ayers, explains that this internal sense relays sensations that come from the organs.

When the brain is connecting the dots, these seven (or eight) senses afford a clear understanding of what’s happening both inside and outside the body. But when it isn’t, the mangled messages can become impairing or overwhelming, leading to a wide variety of defensive or compensatory behaviors. Those with SPD can be over-reactive (hypersensitive), under-reactive (hyposensitive), or both, which can lead to meltdowns and tantrums, as well as behaviors from picky eating to hitting and hugging too tightly.

How does sensory integration therapy work? First, an OT evaluates the child for what they call sensory defensiveness and sensory cravings using a battery of tests, as well as observations and interviews with caregivers. “SI is a complex, ongoing forensic analysis of each child,” Jarrow says. “It doesn’t lend itself well to a cookie-cutter approach.”

Treatment usually takes place in a setting outfitted with specialized equipment, called a sensory gym. Interestingly, the same therapy is used for different types of issues, according to Nancy Peske, coauthor of the book Raising a Sensory Smart Child with OT Lindsey Biel. “A child who is overreactive (hypersensitive) to vestibular input needs to swing and spin to retrain his brain,” she says, “just as a child who is underreactive to vestibular input does. The difference is that if he’s hypersensitive to movement, he’s more likely to resist it, whereas if he’s hyposensitive, or undersensitive, he’s more likely to seek it out.” Sensory gyms may also be outfitted with things like weighted vests and “squeeze machines”—developed by noted Aspie Temple Grandin— to provide deep, calming pressure.

OTs also use something called “brushing,” which, Jarrow says, can be a powerful tool particularly for those children with clear-cut tactile defensiveness. Most parents whose children have received OT have been trained to do a particular kind of routine called the Wilbarger protocol, which involves using a soft-bristled brush applied in a specific way to provide deep pressure, followed by joint compressions, several times a day. While most OTs only use the Wilbarger protocol, Jarrow says he has devised four to five different brushing protocols that are graded based on the level of a child’s responses.

While traditional OT has focused on the tactile, proprioceptive, and vestibular systems, pioneering occupational therapists have been targeting the vestibular-visual-auditory “triad,” which, according to the SMILE Center site, allows us to “perform many important tasks by helping us understand the three-dimensional space, or spatial envelope, that surrounds us wherever we go.”

One new therapeutic approach involves listening programs, which, according to Raising a Sensory Smart Child, use specially designed CDs and headphones to exercise specific muscles in the middle ear. Children can wear the headphones while doing crafts or even swinging and bouncing, further enhancing the integration of auditory input with other types of sensory input.

Children with vestibular issues have poor motor skills and a lack of balance and may seem “lost in space”—not unlike the sensation astronauts experience in zero gravity. Something called Astronaut Training, which employs things like spinning to music, has been developed to address that issue.

Because therapists may only see a child an hour or two a week, SI therapy needs to be carried over into the home and in school in what’s most often called a “sensory diet.” Caregivers work with OTs to create a detailed schedule of therapies specific to each child. (Meanwhile, Miller, who does intensive parent training at her STAR Center in Denver, prescribes not a sensory diet but a “sensory lifestyle.” “We’re all too busy” to maintain a sensory diet, Miller says, “so we need to build it into our family routine.”)

Adaptations to make the home more “sensory smart,” such as creating quiet spaces and reducing visual clutter, are often suggested. Parents may also opt to buy items from a long list that includes weighted vests or blankets, pressure garments, fidget toys or even chewable “jewelry,” all aimed at providing regulating input.

Does this stuff work? Peske says it made huge changes in her son, Cole, now 12.

She noticed that there was something unusual about Cole even in the womb. “He did not stop spinning, moving and kicking,” she says. By the time he was 3, she was noting sudden meltdowns. One time, when she suggested he put on his shoes to go get ice cream with a friend and his dad, the toddler came unglued. He “screamed, fell to the ground, and begin slamming his head against the floor.” Only later did she realize his tantrum had been set off by the idea of putting on shoes and a quick transition, something children with SPD find particularly difficult.

There were many other signs. “Cole couldn’t get to sleep unless we held him for a long time,” Peske adds, “and he couldn’t have his teeth brushed without a major screaming fit. When he was on a swing, he’d laugh hysterically, and if you tried to take him out after he’d been in as long as 45 minutes, he would scream bloody murder.”

At 3, Cole was diagnosed with SPD and multiple developmental delays. He was enrolled in a therapeutic preschool, Biel treated him in OT, and Peske’s husband, George, worked with him an additional two to three hours a day. After preschool, Cole was able to move to a mainstream classroom. “His issues appear so mild at this point,” Peske says, “I wouldn’t be surprised if family, friends, and neighbors who didn’t know him when he was a preschooler think I’m crazy.”

Since kindergarten, Cole has managed his sensory issues with accommodations at home and at school, with no strict sensory diet. “If he plays a videogame, he usually does it while jumping on a mini-tramp or bouncing on an exercise ball that’s his chair,” Peske says. “He rides his bike, runs around the neighborhood playing actively, and swims daily in the summer. Exercise isn’t just important because humans are designed to move, it’s crucial for a sensory kid’s well-being and self-regulation. Our homework spot has no distractions and he’s allowed to bounce, jump, walk in circles, or do whatever else helps him to focus. He often chews very sour gum or sucks on sour candies to help him focus.”

Another mom who’s a convert is Rachel, whose son Jamie, now 8, was “booted from nursery school,” as she puts it, because he was “a hitter and also a hugger.” It wasn’t about aggression, she says. “The fact is he is a doll, but he needed more input. He would throw himself into couches. I was constantly having to peel him off walls. He’d trace his hand across every building, touch every fire hydrant.” While there was no official diagnosis, Rachel says he has always had a “constellation of issues,” including sensory processing.

“OT helped him beyond words,” Rachel says, “but it was a long, long, long learning curve for me.” After attending therapeutic nursery school and following a sensory diet that included the Wilbarger protocol and certain playground routines, he’s now in a mainstream classroom. “He’s super-smart, reading a book a day, but he has a low arousal rate. He needs more to stimulate him. He needs to be sitting in front, away from the hissing radiator, called on often, to stay engaged. He drifts if he’s not getting enough input.”

“He’s still a sensory seeker,” she adds. “He likes to pet people’s hair a lot and tap on them when it’s not appropriate. He still needs to stomp a lot and hug very tightly. But the kid I used to have to keep away from other kids on the playground is now the kid loved by other parents, he’s so nice to little children.”

While many families report that SI therapy has helped their children, there is much debate over the claim that it can change a child’s “wiring,” or long-term sensory responses.

Dr. Catherine Lord, director of the Institute for Brain Development at Weill Cornell Medical College/ NY Presbyterian Hospital, thinks there’s value in identifying and addressing kids’ sensory issues, which she sees in children with ASD, anxiety and ADHD. But she’s not persuaded that “you can frontload the sensory system so that a child can then handle another different sensory experience more effectively.”

And Dr. Lord is frustrated that treatment of young children for sensory issues may be delaying autism diagnoses. “I worry,” she says, “because sometimes we see kids who fall on the autism spectrum and for years they’ve been going to speech and language therapy and occupational therapy for sensory issues, when they should have had people working with them on social skills.”