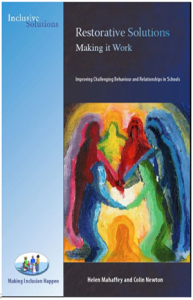 A Guide for Parents and Carers

What is Restorative Conferencing?

Restorative Conferencing is an initiative in some schools which aims at resolving issues of conflict affecting pupils’ behaviour in school. It is a new approach which considers the views and wishes of all those involved in a dispute, and attempts to resolve problems in a calm and positive way putting right the harm that has been done.

How does it work?

What problems can be addressed by a conference?

What is the purpose of a Restorative Conference?

What will happen at a Restorative Conference?

A guide for pupils

Education in school should be a happy time where all pupils are able to do their best in a safe and caring environment.

There are some people, however, who try and stop pupils learning and enjoying school by making them unhappy.

They can do this in variety of ways including:

This is not fair and should not happen.

There are lots of things the school can already do to sort out these problems, but there is also something new that is being tried out in some Nottingham City schools.

It is called ‘Restorative Conferencing’ or RC for short.

This is what would happen if, for example, you were being bullied.

After a while the teacher checks that the promises made have been kept.

RC helps sort out problems in school because

Information and Guidance for Teachers

What is Restorative Conferencing?

When can it be used?

How does it work?

The conference has a structured format and certain phrases and style of language are used which help the pupil involved in a specific incident reflect on how his/her actions have impacted on others and how amends can be made.

There are three main strands to Restorative Conferencing in Schools

All the above challenge the pupil to be aware of the effects his/her action have had and give him/her the opportunity to put things right.

In brief – Restorative conferencing principles can be applied to a whole range of situations within school. It is about how we deal with conflicts and each other.

A cornerstone is that all those involved in and affected by an incident should actively participate in a positive and meaningful way, encouraging pupils to take responsibility for their actions.

Our evaluation shows that it is this communication and dialogue, which restores and promotes reconciliation.